Our sweet baby Owen was born with bilateral Congenital Talipes Equinovarus (Clubfoot).  I write this to help bring awareness to Clubfoot. I don’t write this to scare anyone, especially someone going thru this with their clubfoot cuties, but to let others know that your sweet baby and you WILL get thru it.  It WILL get easier. It is hard, there’s no denying that, but you and your baby are stronger than you ever knew!

Because of Covid, I went to my 18-week anatomy ultrasound alone. The doctor told me that our baby’s right foot was club and potentially his left, I needed to have another more in-depth ultrasound as the clubfoot deformity can be a characteristic of many other disorders and syndromes. I honestly had no idea what clubfoot was or what it even meant, I had no idea what to expect or if my baby would be okay. She showed me a picture of a baby’s foot twisted inwards and upwards. I felt so overwhelmed, confused, and beyond sad that my baby could be in pain. I phoned my husband then my mom to let them know what I had learned. I was devastated. I cried with my mind racing the whole way home from London. I was terrified at the thought that this could be a sign of something worse for our baby.

At the next ultrasound they did a very thorough scan of all his body parts and took a ton of measurements ultimately ruling out, to the best of their ability, anything else wrong. They did confirm that he had bilateral clubfoot (meaning in both feet), but that the clubfeet were isolated and not related to any other issues that could be determined in utero. The doctors reassured me that it was treatable, but it would be a long process of casting, surgery, and bracing.

One of the most incredible and magical moments in my life was seeing Owen for the very first time. My doctor bouncing him up and down right beside me, I saw the most beautiful, pudgy, roly-poly boy. He was absolutely perfect, and I was so in love. I never even noticed his feet. The first time I unwrapped him from his blanket I looked at his feet and yes, his feet were crooked but to me they were perfect.

The first days with him were full of emotions, love & bonding as Owen spent 9 days in the NICU. After failing the newborn CCHD screening at 24 hours old and with low oxygen levels, Owen was first assessed by NICU and transferred. Initial chest x-ray showed potential pneumonia so antiobiotics were started. They first put him on low-flow vent oxygen which wasn’t enough, switched to hi-flow vent and then to CPAP. Feeding tube was inserted as he couldn’t orally feed with CPAP. After being on CPAP he continued to worsen. Second x-ray showed a large pneumothorax, so he required to have thoracotomy surgery (chest tube) to release the air in his chest cavity. Bloodwork was constantly needed, and the lack of circulation in his clubfeet, they could not get any more blood from his feet and an arterial line was required. He remained steady for the following 4 days and when the next x-ray showed the pneumothorax had cleared, the chest tube was removed (at which point I was finally able to hold him), and when removed, nurses were able to slowly wean him off of oxygen support. Day 6 feeding tube was removed and we were able to orally feed again. His vitals remained strong without any assistance and we were discharged to come home on day 9. 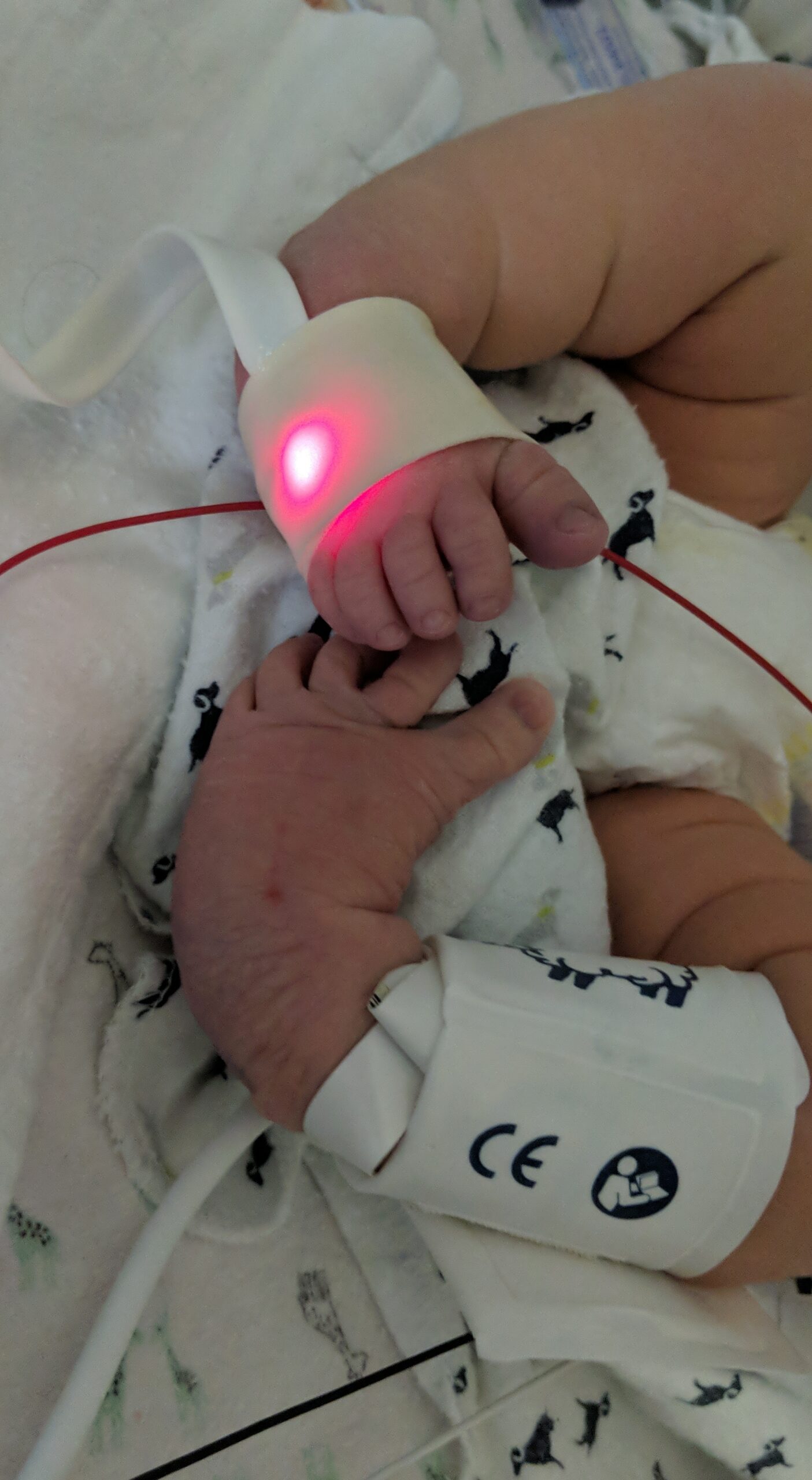 We weren’t home long before we began his clubfoot journey. At 20 days old, Owen started his clubfoot treatment. I wanted to remember his feet just as they were. I loved those imperfect feet. They curved where the arch of his foot would have been and at an unnatural upward position, but all I saw was perfection. When he pulled his legs in, his feet would tuck right up to his bum and his legs would make a heart shape.

As odd as it sounds, I didn’t want to go and get them fixed. Yes, I understood that he couldn’t walk with his feet like this, so I knew we had to get them fixed and starting treatment as soon as possible was the best option.

At the first appointment with our pediatric orthopedic surgeon in London, he manipulated Owens’s feet into a more “normal” position and casted both legs from his toes to his upper thigh. This first casting, along with all those that followed, I stood next to Owen and watched him scream and cry cries I had never heard before and turn a tomato shade of red. I felt so helpless, unable to console him, I broke down too. He was so uncomfortable, the casts were heavy, wet, and cold. The drive home was awful and sleep that night was nonexistent. The first night after each casting was by far the worst, I’d rock him, bounce him, try to warm the tips of his toes that were cold from the casts that took 24 hours to dry but the crying would stop for only small amounts of sleep at a time. It’s like he was begging us to remove the heavy weight on his legs. He was so fussy from gas unable to move or bend his legs to help move the gas through. That night I cried with him too hoping it would all be over soon. Having a baby in casts was hard, we couldn’t bathe him. If he got poop on his casts, I just had to wipe them the best I could. I couldn’t wear him in a carrier, he couldn’t wear pants or footed pajamas, he was awkward to hold and nurse in some positions and he was hot in those casts. As each day came, it did get easier. Owen would get used to the new position of his feet, the cast was dry and no longer cold or as heavy. We went back to London weekly to have the casts removed, feet stretched further, and new casts put on where we would repeat the same screams and cries, the same shade of red, the long drive home and sleepless nights. He ended up developing a large umbilical hernia due to the pressure on his stomach muscles from the weight of the casts. During these weeks we struggled, but we survived.

At 6.5 weeks old, Owen’s fourth set of casts were removed, and his feet were in a “normal enough” position that he then had surgery on each of his feet. Attending all the appointments alone was hard, but the surgeries were beyond difficult. I had the choice to be with Owen during the surgeries and didn’t want him to be alone, so I rubbed his head, he held my finger as he incessantly screamed and cried during both procedures. It was so difficult to watch, that I couldn’t for the 2nd foot. I kept my eyes on Owen’s face as I continued to do whatever I could to console him. After each surgery, he was re-casted. This set of casts stayed on for 3 weeks while the tendon that was cut during surgery would reattach itself. 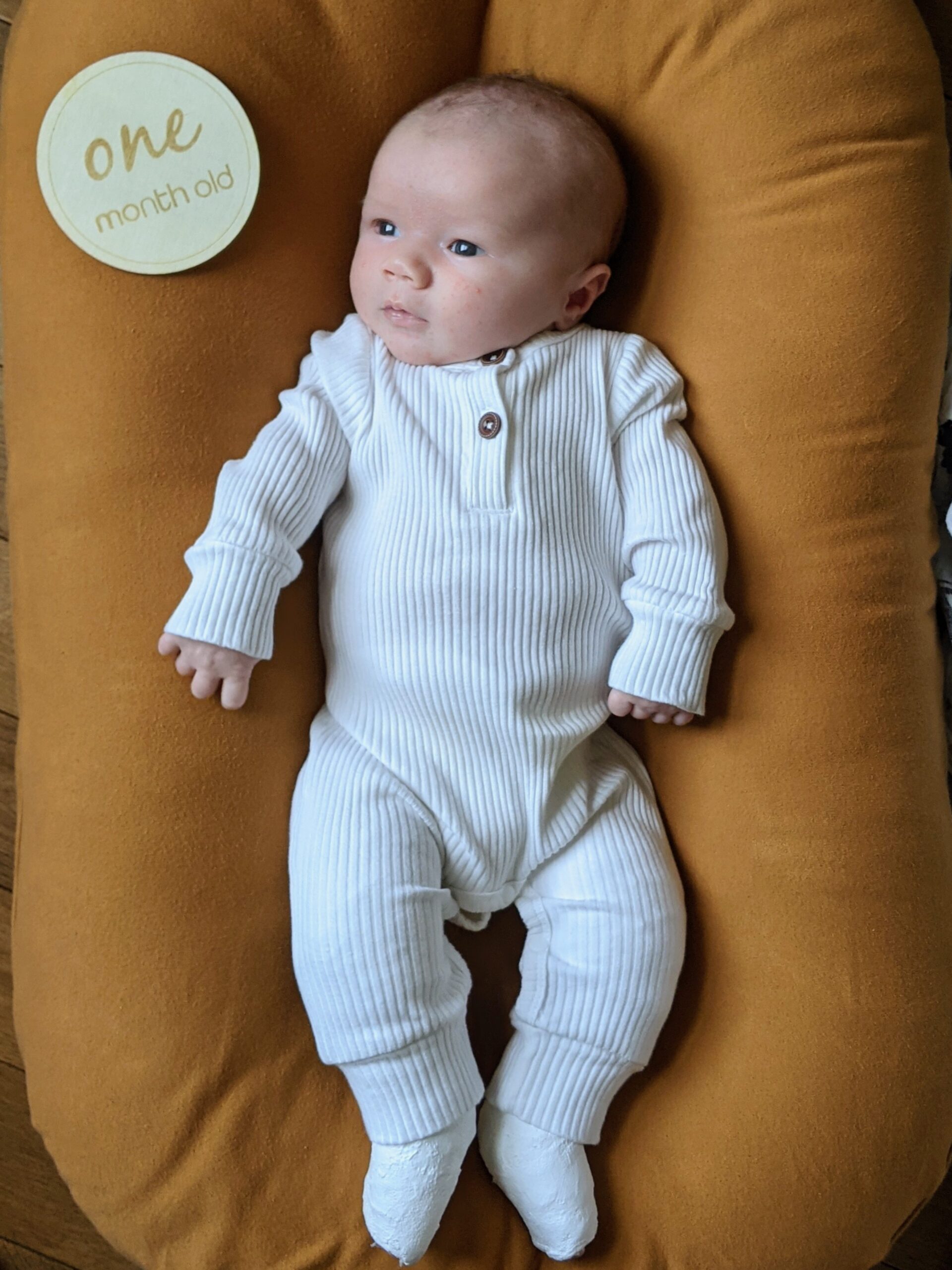 Owen celebrating one month with casts.

On June 17th, Owen got his final set of casts off. We immediately went to an orthotic clinic where he was fitted for his boots and bar. I had been so looking forward to the braces, it was another step closer to correction. I convinced myself that everything would be better when we were done with casts, but that did not turn out to be the case. The braces are heavy, too, and confining, and something I hadn’t even considered was how sensitive his feet would be. His feet had been in casts and not touched for 7 weeks. Each time his foot slipped, or we took a break (he got 1 hour every day) it was dreadful putting them back on. He screamed and cried.  He consistently had blisters in new places. But, just as the casting phase got easier, the boots and bar did too. He had to wear them for 23 hours/day until September 30th when we got the okay to go to nap-time and bed-time wear. In March, Owen’s surgeon was impressed with the flexibility in his feet and eliminated the need for the nap-time wear.  Owen is now only wearing his boots and bars for 12 hours thru the night, which will continue until he’s 4+ years old.  He is currently on his 5th set of boots and is frequently seen by his paediatric orthopaedic surgeon and his orthotist in London. Getting them on most of the time is a bit of a wrestle, but he truly is so patient, and you’d never know all he’s gone thru with his absolutely hilarious personality!

Navigating each stage has been extremely hard, but looking back now, the time truly flies by fast.

I can’t even begin to fathom the strength it has taken Owen to go thru all of this. I am in awe of Owen and forever will be for all his fight, strength, and resilience. 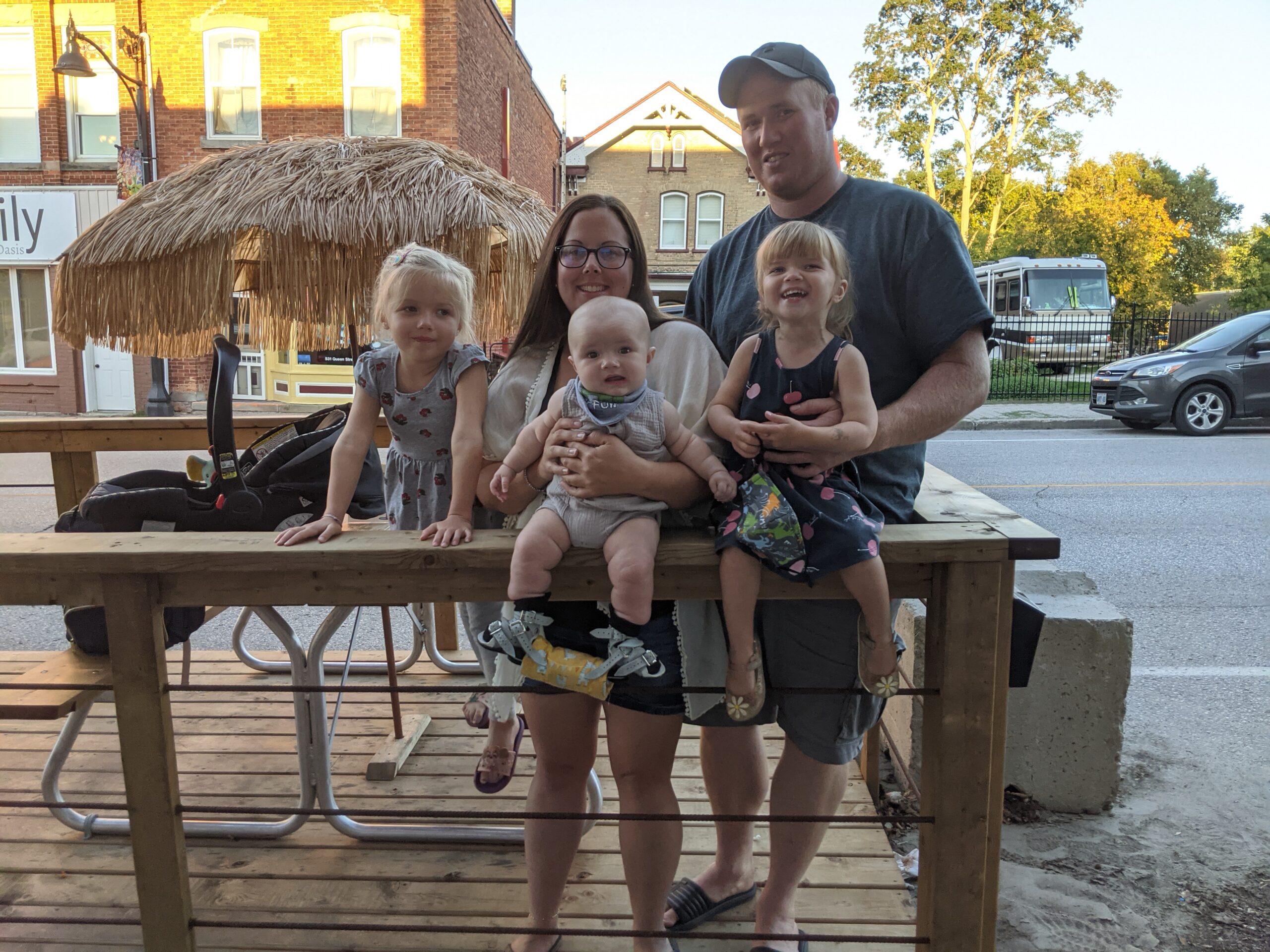 Owen enjoying life in boots and bars with his family.

The Canadian Support Society thanks Owen’s family for submitting their clubfoot story to clubfoot.ca to help support and encourage other families just starting this journey.  Our clubfoot cuties have so much strength and determination! 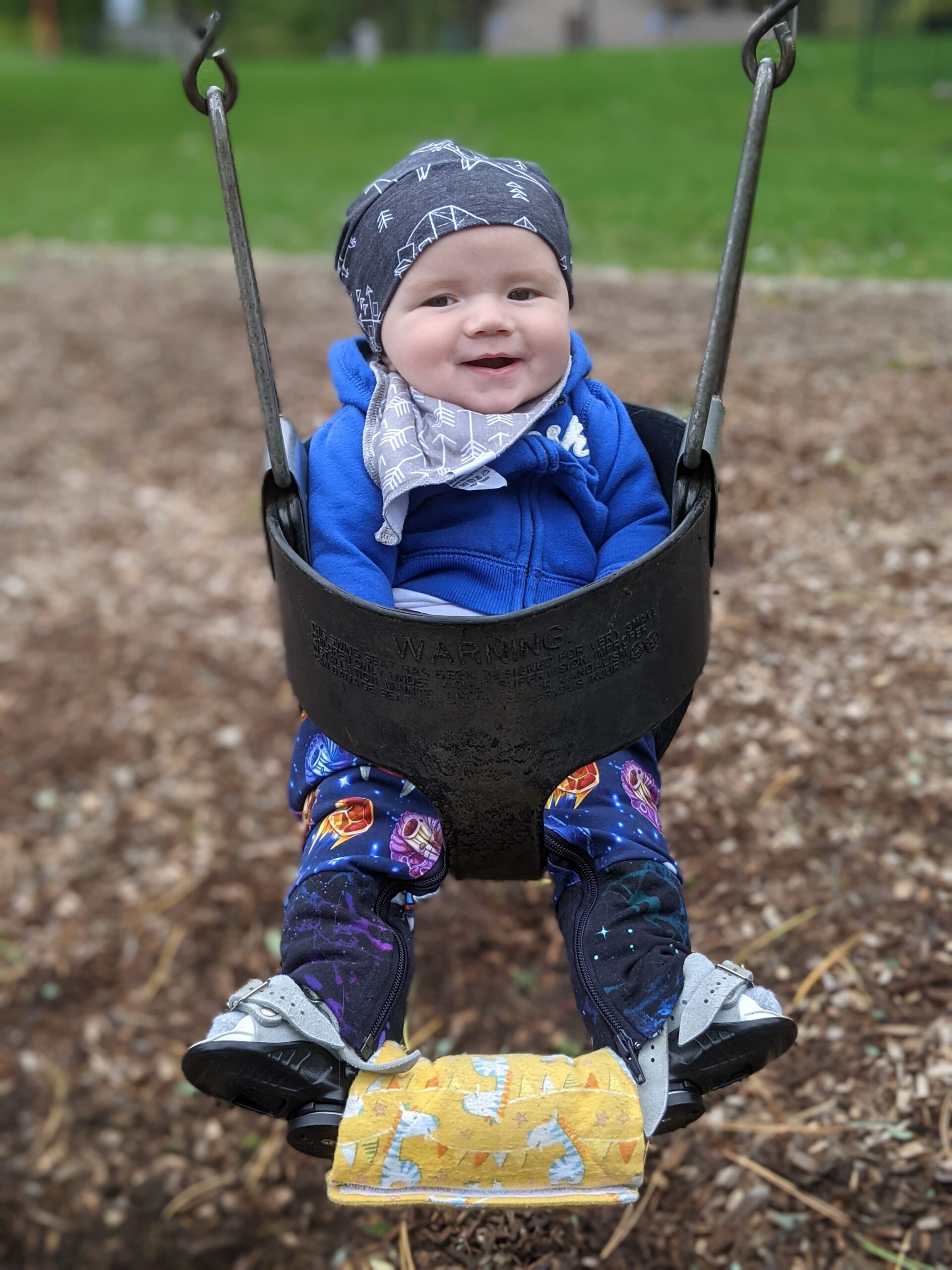 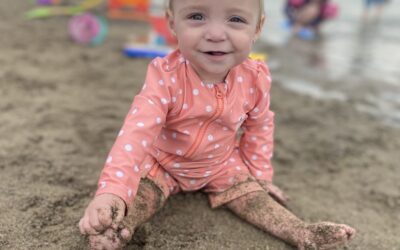 Addy is a twin that was born at 30 weeks old weighing 2lbs 11oz with bilateral clubfoot.  She spent 8 weeks in the NICU due to prematurity before coming home 2 weeks before her due date.  At 39 weeks gestation Addy started her treatment journey at McMaster Hospital in...

END_OF_DOCUMENT_TOKEN_TO_BE_REPLACED 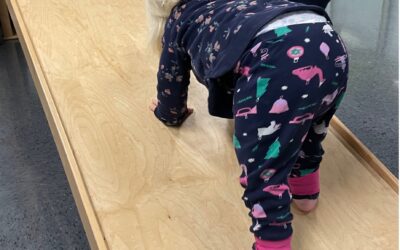 Many families are probably quite familiar with stretches for their clubfoot cuties.  Clubfoot.ca has videos demonstrating clubfoot stretches under “Resources” for further guidance.  When you are holding a stretch for your child, physiotherapists refer to this as...

END_OF_DOCUMENT_TOKEN_TO_BE_REPLACED 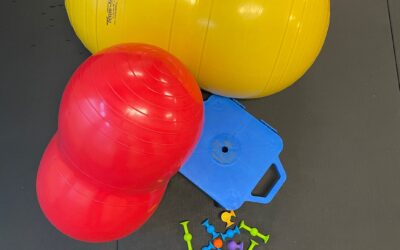 There are many great equipment and toy options available for fun and functional play for growing clubfoot cuties!  It can be overwhelming deciding what to pick and choose. At our KPG (Kids Physio Group) clinic we have a wide variety of toys, games and equipment I use...